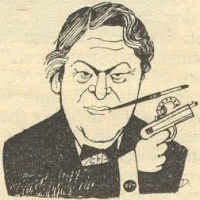 This thread basically does what it says on the tin. This is the thread for all "out there" strange and bizarre stuff that exists here on Planet Earth and further afield - ghosts, UFOs, elves, fairies, leprechauns, spirits, time travel, aliens, hooded men with lanterns in fields at night, the Real Men in Black, phantom death coaches, poltergeists, banshees, strange clouds, time slips, crazy or credible conspiracy theories, alternative religions, unexplained phenomena, cults and sects, Voodoo and black magic, the Occult, Seances, Ouija Boards, the Bilderberg Group, the Masonic Order, secret societies, the Skulls and Bones, the Hollow Earth Theory and just general bizarre stuff...it all belongs here in this thread! Let's get a discussion going. There are Bond links here of course - you only need to look at the Black Magic and Voodoo ceremony elements in Ian Fleming's Live and Let Die and in the film version of the same name!

I'll start the ball rolling with what I found out only just this week about the American elites who visit Bohemian Grove and belong to the Bohemian Grove in California in the United States where they take part in a freaky ceremony called the "Cremation of Care Ceremony". You can read more about it on the net, but here are some excellent You Tube videos that have recorded footage of what goes down at these ceremonies:

This thread is just like "Arthur C. Clarke's Mysterious World"...erm...only it's by Silhouette Man.