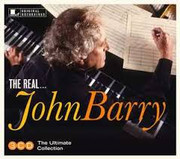 Out last week, my copy arrived today. This is a budget 3CD set, in a series aimed at heading off those who exploit the public domain laws. It's less than a fiver on Amazon and eBay, and can be seen as a trimmed-down version of the much more expensive "Themependium" box*.
It's got a good helping of Bond music (eg FRWL, GF, TB, YOLT, OHMSS, DAF, the Bond Theme, 007, "All Time High" and others), Barry's Oscar-winners ("Born Free", "The Lion In Winter", "Out Of Africa", Dances With Wolves"), a few rarities and plenty more. Be aware that most of these are not the soundtrack versions, but were re-recorded by JB for various albums- but it's still the real John Barry, as the title says, and uses many of the same musicians (Derek Watkins, Alan Haven, etc).
As I said, it's a budget set and the notes are non-existent but the SQ is good and at this price it's a steal for anyone who doesn't have a large Barry collection and would like to hear more.
One quibble: I wouldn't have picked the version of the "James Bond Theme" used here- it's the "Moviola" take, arguably the weakest version done by Barry himself.

* Unlike "Themependium" it doesn't include vocals from Shirley Bassey etc, these are all orchestral versions- whether you prefer that or not is down to taste.