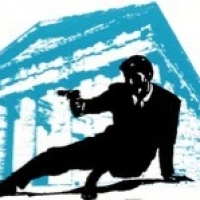 Silhouette Man The last refuge of a scoundrelPosts: 7,527MI6 Agent
September 2018 edited September 2018 in James Bond Literature
We all know about Francisco Scaramanga's golden gun and golden bullets from Ian Fleming's last Bond novel and the ninth film in the series The Man with the Golden Gun. It is an iconic weapon from the James Bond universe. In the novel, it was a revolver whereas in the film version it was a gun that could be concealed (for air travel etc.) by breaking it down into rather harmless looking everyday items that made up its constituent parts. What is less well known, perhaps, is whether such a gun, made of gold and its golden bullets would have worked very well in real life. The James Bond novels and films are a fantasy of course, though also often grounded in fact. In the factual realm then, it is well known that such notorious figures as Adolf Hitler, Hermann Goering and Libyan dictator Colonel Muammar Gadaffi all owned ornate golden guns. Perhaps the guns owned by Hitler and Goering even inspired Fleming to give such a gun to his final Bond villain, Scaramanga.

The idea for this thread came to me when I was reading an old issue of the American short story magazine Argosy ("The No. 1 Men's Service Magazine") (March 1966/Volume 362, Number 3, p. 85) which on its cover advertised a short article inside about "Hitler's Solid Gold Pistol". The short one-page article inside the magazine entitled simply 'Hitler's Golden Gun' describes how the golden gun was made for Hitler:

"Surely the most successful souvenir hunter of World War II is the fellow, identity unknown, who copped Adolf Hitler's solid-gold 7.65-mm Walther automatic, shown on our cover, and brought it back to the States. The gun is one that was presented to Hitler by the Walther Company on his fiftieth birthday - April 20, 1939 - and which he wore as his personal sidearm from then on. Hitler was a nut for uniforms, and having his sold-gold, ivory-handled monogrammed pistol strapped to his side must have added a little extra bounce to that famous strut of his."

As you can see from the quote directly above the golden gun was the same model as Bond's own signature gun - the Walther PPK 7.65 mm. There's more on Hitler's golden gun here:

The Argosy article continues (and this is the most interesting bit pertinent to this thread topic):

"It is possible that this weapon is the one with which he ended his life. [Edit: This theory has since been disproven. SM.] The usual story of Hitler's death is that he shot himself in his bombproof bunker. Subsequently, the bunker was blown up, along with Hitler's body. The gold Walther is undamaged, however, though a laboratory check has revealed traces of human blood under the ivory hand grips. We understand that when the gun was first found, it had a clip of silver bullets, only one of which had been fired. Since the weapon is made of gold, only a few rounds could ever be fired from it without ruining it." [My emphasis.]

So, from reading this, are we to assume that such a golden gun as used by Scaramanga in the novel and film versions of The Man with the Golden Gun would be similarly ruined or damaged by such heavy use as he obviously subjects it to? In the novel towards the end, Scaramanga tells Bond that he was to be his 50th victim, for example. I know that the weapon in the novel and film may have been an amalgam of metals and was merely gold plated and that Hitler's gun was solid-gold. In the novel, for instance, we know from the British Secret Service dossier on Scaramanga that his gun is described as "the gold-plated long-barreled, single action Colt .45." However, it has got me wondering about the real-world viability of such a golden gun and its bullets from a ballistical point of view.

Any help from resident gun experts or anyone else would be greatly appreciated!

Post edited by Silhouette Man on September 2018
"The tough man of the world. The Secret Agent. The man who was only a silhouette." - Ian Fleming, Moonraker (1955).