£10,000 Cash Reward offered for the recovery of stolen James Bond guns ....hand me the guns I hand you the cash!


It is said that crime does not pay however it has now been 6 months since the guns were stolen during a break in on 23rd March 2020. The value of these iconic weapons is not as high as the media would have you believe because the £100,000 quoted is their estimated auction value. Their actual cost price was £25,000 for Roger Moore’s Smith & Wesson .44 magnum Model 29-2 revolver, SN: N60304, £6500 for Roger Moore’s Walther PPK, SN: 146872, £6000 for Halle Berry’s Beretta Cheetah (Lot # 269), SN: H02641Y, £10,800 for Halle Berry’s Beretta Tomcat (Lot # 273), SN: DAA264306, and £5040 for Rachael Grant’s Llama Especial (Lot # 267), SN: 271915, bringing a grand total of £53,340. A 20% cash recovery reward is being offered on their original cost price. These values can be checked against Christie’s "Guns of James Bond” auction results from December 5th 2006, indeed 3 of the guns still had their Christie’s auction tags attached. Their value or lack of on the secondary market is negligible. All 5 weapons are recorded on The Stolen Weapons database with both UK proof houses and all reputable UK deactivated weapons dealers, film industry armourers and the Bond production company. All 5 weapons come with extensive documentation from the armourers who originally supplied them along with UK deactivation certificates. Without this paper trail reselling them openly would be difficult to achieve a sizable windfall. Because they were ultimately being gifted to them as “a living will” I had requested that The Royal Armouries offer a reward to recover the weapons but as a publicly funded establishment they declined.

Without the movie connection a deactivated 6.5” barrel Smith & Wesson Model 29 revolver is worth around £750, a deactivated Walther PPK is worth £350, a Beretta Cheetah around £500 and a Beretta Tomcat around £350 and these would come with deactivation certificates. The value of a deactivated Llama Especial is unknown. As some may have seen on BBC's Crime Watch? the frame only of the Spanish Llama Especial has been recovered by Police so the deactivated barrel and top slide are still out there and will still qualify for a reward upon their recovery.

8 months ago, the Police asked me if I was in a position to offer a reward? But after the spare car keys were stolen (the objective of the break in) and my shelling out £3700 to secure said car with new door and ignition locks, new coded keys and remote fobs plus £700 for damage to the rear door to the property (neither of which were covered by insurance) the proverbial pot was empty!


The Police campaign was to make these weapons too hot to handle therefore If while out walking the dog? You found them in a bag in a forest or in a bag in a river or a bag in a landfill site? I do not care. If you stole them from my property? I do not care (yeah right!). No questions will be asked. I just need to recover them and possibly restore them? so they can be delivered to The Royal Armouries in Leeds or a similar venue, where they should have been when the home invasion occurred. If they have been left open to the elements or left in a damp environment for 8 months? Then the chrome plating on the revolver may have started to lift and flake off like a rusty car bumper, the blued finish on the PPK may have started to look like brown sludge and the stainless steel/plated finish on the two Beretta pistols may have become stained/milky white in appearance? Up until the time of the theft they were only handled with curatorial white cloth gloves to protect their screen patina which I guess now is completely buggered so recovery is against the clock! If like the Llama they have been broken down for parts? Then those even rusty parts still have a high recovery value. Regrettably because they were waiting to effectively permanently go into a museum, they were not insured so they are still my property not an insurance company's hence I can guarantee no entrapment, “no questions asked”. This is not a victimless crime. Ten years of my life went down the crapper when they were stolen. Ten years of research to find them and write about them, ten years of my life to get the funds together to secure them and barely a year of my life to physically own them or at least be their temporary keeper. The Evening Standard quoted “the owner is devastated at the loss”….. He still is!!, however this is also a loss to the British Film Industry and technically a loss to the heritage of the Bond production company EON Productions Ltd.


To put a face on what otherwise appeared to be a victimless crime? The Police Media Unit asked me to speak to a number of chosen periodicals on the agreement an alias be used (author Mark Hazard, the author, researcher and photographer of The 007 Magazine Special “The Most Famous Gun in the World” with design by Robert Gritten, a ten year project to research, track down, catalogue and secure for posterity all the firearms used in over 50 years of James Bond movies) of which those I spoke to initially agreed to. Unfortunately, The British Broadcasting Corporation who I did not speak to utilised the basic no thrills Police media report, however they named me and with other periodicals publishing the road I live in this pretty much painted a target on my back forcing me to empty the house contents into hopefully safe storage with the deactivated guns going to a London based armoury. How the hell is this in the Public Interest? This is very dangerous and very careless reporting! I complained to said News broadcaster but they did not even bother acknowledging my communication which was sent on their own website. Unfortunately, the other periodicals then followed suit thinking this was okay? How to kick you firmly in the nads when you are already well and truly down!! …. And now 6 months later as the media circus kicks off yet again certain periodicals have again chosen to publish the road I live in. WHY FFS???


My home was targeted because of the car parked in the front drive. Because of a medical condition which makes it unlikely that I'll ever need it? that car was purchased from the proceeds of a cashed in personal pension plan after HMRC took their chunk for taking a pension in one hit. The weapons were bequeathed to The Royal Armouries because of that medical condition. If I’m talking to the gang who broke in? Then you will know how to contact me, on a one on one basis with your representative only. A photo of the guns/gun parts? against a current newspaper will get the ball rolling or you can hand them into your local Police station c/o D.I. Paul Ridley with your contact details or get a friend not connected to the crime to hand them in or contact BBC Crime Watch to claim the reward or of course you can hold onto them and await a potential knock on the door and receive a very different less profitable reward!


Two media inaccuracies which I would like to address are I do not have or have ever owned Oddjob’s bowler hat. It was sold through Christie’s in September 1998 as Lot # 235 for £62,000 and was purchased by EON Productions Ltd, the production company who make the James Bond movies. Apparently this information that I have one in my possession came from a source close to the investigation! I do have an off the shelf Jaxton & James Victorian top hat as used by Daniel Craig in SPECTRE costing £50. Big difference! Not very Harold Sakata, more like Harold Steptoe! A number of papers reported there being 60 guns in the property including those stolen where in fact there were 20 deactivated weapons including those stolen. The remaining being harmless solid rubber, resin and fibreglass stunt movie weapons used in fight sequences. The in depth details of what stunt weapons are were supplied to the media but I guess not as sensational as just saying "60 weapons!", which 6 months later they are still choosing not to correct!


Please feel free to share this post on Social Media where it may do the most good. Thank you. 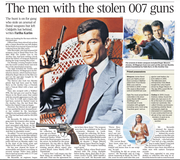 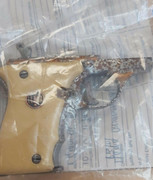 The recovered rusty frame of Peaceful Fountains of Desire's Llama Especial, amazingly with the magazine still in place!