This is just a fun thought I had about an action comedy film.

The basic plot. After an action packed pre title scene where he fights off a group of men who he thinks are mugging a tourist (but the robbers are actually enemy agents and the man a British spy), a young man comes to the attention of the British MI6. It turns out he is the son of James Bond and a local woman who was conceived while Bond was in Jamaica to investigate Dr No. Some photographs of Sean Connery would make sure which Bond was the father, but of course the time would be changed to make it fit a film made today.

(Bond never knew about him). The young man has inherited his father's abilities and is recruited to work as a trainee agent. He is sent on an 'easy' first mission but is soon unexpectedly battling his own Bond villain to save the world. I don't have a title though.

The son of Bond is played by this man. 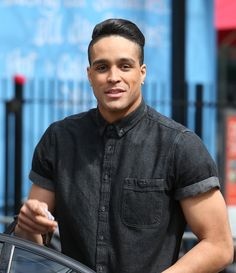