The First "No Time To Die!"

There hasn’t been a lot mentioned of an earlier film called “No Time To Die!”, despite it having many Bond connections. It’s been mentioned in the Imaginary Conversations thread more than once (young Michael G. Wilson makes a note of the title for future use in one of them, and Terence Young assures Cubby Broccoli that the film will be released on time in another) but not much elsewhere. 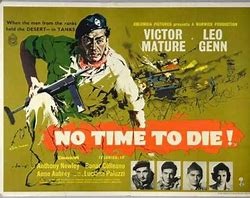 It’s a WW2 movie which was renamed “Tank Force” in the States, and was made by Warwick Productions which is arguably a predecessor to Eon Productions with Albert R. Broccoli being one of the producers.

With thanks to Alan More, here’s some of the credits-

Now, a lot of those names should seem familiar to those who read the credits on early Bond movies. Terence Young directed DN, FRWL, and TB. Richard Maibaum wrote or co-wrote most of the Bond movies from DN till LTK. Ted Moore was Director Of Photography on the early films… and so on.

Luciana Paluzzi is in TB. Anthony Newley co-wrote the lyrics to GF…. Etc.

It’s not a great film, though not the worst, but the Bond connections should justify a viewing.