JAMES BOND IS DEAD! if you have any doubts of this? then read on!

In 2012, I approached EON Productions with a retail quality volume entitled The Most Famous Gun in the World in the hope of receiving 50th Anniversary endorsement. The volume was rejected and they would not even look at it however I was told as an unofficial volume I could not use the James Bond name, the 007 brand or any of their copyrighted press photos! I informed them they only owned the 007 brand with the Seven forming a gun, they did not own the James Bond name as Ian Fleming openly admitted he nicked it from the author of Birds of the West Indies and as for the copyrighted images, as long as I showed the clear copyright for each film they couldn't stop me using them! They could however say no publication can use their copyright images but it would be unlawful to direct this at one individual project and so after previously rejecting it for quote "not being commercially viable!" 007 Magazine printed and sold out Famous Gun!

Thank you for your email. Regrettably we cannot give you permission to include any Bond materials or images owned by EON in your book project. We have exclusive official long standing partnerships with Dorling Kindersley and Taschen meaning we cannot give approval in this case.

Can I kindly remind you that all Bond assets are copyrighted and trademarked.

I realize this isn’t the answer you wanted and that you will be disappointed however we cannot and do not support any unofficial projects. Please note, we have informed both Chris R & Joss of our position on this matter.

IN CASE ANYONE WANTED TO SEE WHAT AN OFFICIAL CEASE AND DESIST LOOKS LIKE? and remember after being hit with this I later loaned them Sir Sean Connery's Little Nellie helmet from You Only Live Twice and the Asprey On Her Majesty's Secret Service Angels of Death vanity case for Bond in Motion!

Jump forward to September 13th 2021 and the follow up entitled "007 the Armoury" a 150 page hardback tome was delivered to EON's London address in Mayfair, 138 Piccadilly, in the hope of it receiving official 60th Anniversary endorsement. Six months later after waiting patiently I received the following communication this evening (email addresses have been removed as a matter of courtesy and the data protection act!):

Sorry not to get back to you sooner.

I did show your book to our publishing managers. Unfortunately they don’t think it is the right time to publish a niche book on Bond firearms nor the brand image they want to promote at this time. I know this will be disappointing news for you. If anything changes I will let you know.

If weapons are something which the 007 brand does not wish to be associated with?, then where does that leave Bond 26? Will 007 address life threatening situations with well thought out meaningful politically correct debate with a nice cup of tea while taking into account the feelings of his antagonist? ..... BULLSH*T!

I should add by the way that 007 The Armoury is a "SIR SEAN CONNERY TRIBUTE EDITION. I also produced a SIR ROGER MOORE TRIBUTE EDITION pre-pandemic for their considerations 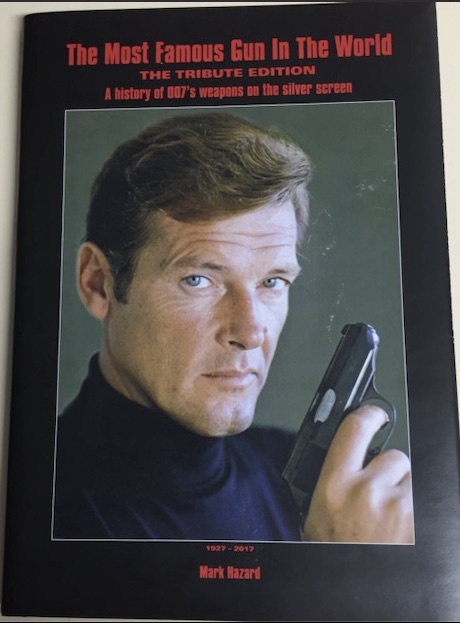 and even though I think he is A GREEDY TOOL! if Lazenby were to kick the bucket tomorrow? I would produce a GEORGE LAZENBY TRIBUTE EDITION because of my love for his one Bond movie!