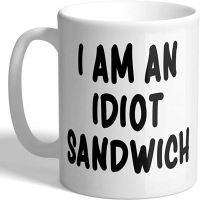 TV Shopping channels. Having flicked on the box while I munch my Sunday breakie, I flick through the channels to stumble upon some DIY shopping channel.

Ok, so people need to sell their tat, but I draw the line when a guy is demonstrating his DIY painter sprayer and the presenter, when told the colour of the paint is "a kind of chocolate" asks "it's not real chocolate, is it?"
'Force feeding AJB humour and banter since 2009'
Vive le droit à la libre expression! Je suis Charlie!
www.helpforheroes.org.uk
www.cancerresearchuk.org
«1234567…161»