Where can I view Dalton's press conference in which be was unveiled as the new Bond? 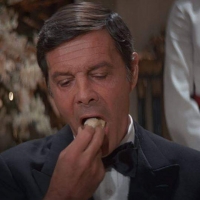 Such footage exists for Brosnan and Craig, but I've never seen any for Dalton's Bond. Could this IMDb entry suggest it exists somewhere? https://m.imdb.com/title/tt5631108/