Passing the time with U.F.O.

I've been watching this 1970 show in the mornings or early evenings on the Horror Channel.

U.F.O. was master puppeteer Gerry Anderson’s first foray into adult television, following on the heels of the movie Journey to the Far Side of the Sun, which was not wholly successful, as well as the relative failure of the children’s series The Secret Service. U.F.O. too is not entirely successful, at least from this opening episode.

The hallmarks of Century 21 Productions are all in place: Barry Gary’s music, Derek Meddings effects, Sylvia Anderson’s fashions, a zippy credit sequence, decent model work effects, lots of close-ups and a smattering of action. There’s even a mysterious alien nemesis – not named – who sends emissaries millions of miles across the universe to try to invade Earth. Well, we think that’s what it’s about, but come the final reel we learn the aliens are in fact harvesting organs from their human captives.

The show neatly delves into the late sixties / early seventies irrational fascination with unidentified flying objects. Where do they come from? Why are they here? Are they dangerous? Are we ready? All these questions are posed and partly answered in this opening episode, so I can’t help wonder where the show can go from here.

The episode kicks off with an alien sighting: three teenagers are brutally murdered, one of whom appears to have been subjected to a rape, her clothes all torn and her knicker line flashing. She is the sister of Capt. Carlin, a character we’ll learn more of later. Meanwhile Commander Straker [Ed Bishop] has gathered evidence of the alien landings, but on his way to the United Nations, his car is blown up. We move forward a few years [to 1980, in fact] and find ourselves at Harlington – Straker Film Studios, a front for the underground base of SHADO, the Supreme Headquarters Alien Defence Organisation. SHADO has a whole roster of secret installations: a Moonbase, Sky Diver, Sky 1, and SID, the Space Intruder Detector, which is basically a computer in space.

At this point, we follow actress Ayshea Brough’s swaying hips, encased in the shortest of short pink cashmere mini-skirts, braless, gorgeous, which is quite an arresting sight at 10am in the morning. I suddenly thought I was going to be in for some cheeky fun. 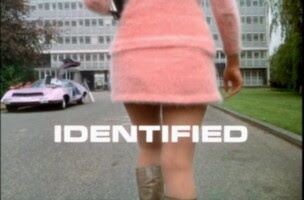 Unfortunately, the SHADO operatives are a glum bunch. Straker looks permanently on edge. His number two, a sort of James Bond type played by George Sewell, is supposed to be the ladies’ man, but he already looks too old and his chat up lines are terrible. When he compares cloud cover to a stripper’s G-string, I was gawping in amazement. James Bond never said anything so crass.

The uneasy overriding sexual tone doesn’t help matters. Sylvia Anderson’s costumes are borderline soft-porn, all see-through shirts and ultra-tight bodices, which is fine when the gorgeous Gabriella Drake or the aforementioned Ayshea or any other of the striking young fillies on site are filling out the space suits, but they really don’t seem very practical. There’s no explanation for the Moonbase female operatives’ mauve wigs either. When Miss Drake began stripping for her reveille I wondered where the show was heading, but thankfully [or not] the scene plays with some wit and ends quite harmless. [I think I should be disappointed, but I wasn’t.] The men spend most of their time encased in similarly impractical jumpsuits where the stitching looks set to burst in inappropriate places. Curiously, the costumes owe much to Doctor Who and even the SHADO equipment resembles some of the tech we witnessed in the Pat Troughton era of the show, particularly the costumes and the Moonbase. But Doctor Who never had moments like George Sewell getting hot under the collar when introduced to Wanda Ventham’s sexy boffin Virginia Lake. “This is one time I wish I was travelling at sub-supersonic speed… I get more time to spend with you,” he muses. Blimey, George, do the ladies really go for this kind of talk? Obviously, as later, when his aircraft is under alien attack he quips: “Trust me. I’ve got a dinner date with you and I’m going to keep it.”

Writers Gerry & Sylvia Anderson and Tony Barwick do perfunctory work; so does Gerry behind the camera. They seem not to know if this is a kids show or an adult one. The tone fluctuates. The dialogue and themes are adult; the action, after the initial taut opening scenes, rather flat and childish.

There is a plot, but it isn’t enough to sustain fifty minutes of action. This is your stereotypical pilot episode. The characters are introduced, the hardware, the basic set up, the interpersonal relationships. Everything is a tiny snapshot of things to come. In the last third, a U.F.O. is shot down and the humanoid creature inside dies because it can’t breathe our air. There are elements of Area 51 in the SHADO base, which I enjoyed, but this wasn’t really exploited enough. It was quite chilling when Cpt Carlin learnt his sister’s heart was transplanted inside the alien’s body. Unable to explain her death, we witness him grieving at the funeral: there’s no body, just an empty coffin. The episode ends on a moment of vast, galactic reflection.

Overall, not a bad start to a cult television show, but I do hope it gets more focussed.