Spoilers-NTTD's a remake of the last Bond film you'd expect

This started as some light banter with emtiem, but the more I think about it….

James Bond has retired, still in his 50s, after an unhappy love affair, to an idyllic home. He is approached to come back to work- he’s initially reluctant but then agrees. The villains make an attempt to kill him early in the story while he’s in his car, but he survives. (I nearly added "of course" but I guess we can't say that any more. 🙁)

The main actress also had the female lead in an earlier Bond movie, and there is some dubiety as to her character's loyalty. His old number, 007, is given to a younger agent or agents. He finds out more about M than he has known before. Miss Moneypenny is of course invaluable to him and his work.

Important to the plot is that he has a daughter he's never seen by the lady in the unhappy love affair mentioned above. They meet, and begin to make up for lost time in their relationship.

The traditional main villain is killed well before the end of the story, a younger villain who had arranged this taking his place and who has a plan to kill major parts of the population of the world by some sort of vague scientific method. This villain kidnaps Bond’s daughter, obliging him to trail the villain to his base (full of tunnels and strange rooms) where they face each other for the first time in the movie followed by a lot of fighting, Bond with a machine gun at some point.

Bond dies when the villain's lair explodes at the end of the story, other major characters you might not expect to die during the film also, though the world is saved.

A well-known beautiful love song (not the title song) which became a standard is prominent in the score, both vocally and instrumentally. The film has a long and troubled production, with at least one major director starting but not finishing the job. More writers than usual (some have worked on Bond films before, some haven’t) including a young recently acclaimed comedy writer are involved with the script, which takes only a little of Fleming as inspiration.

Sound like any recent film we’ve all seen? Of course it does, but it also refers to a Bond film over 50 years ago. And yes, it is a James Bond film like it or not. It is, of course, "Casino Royale"... the 1967 version.

Here’s Bond with a machine gun in the villains base- 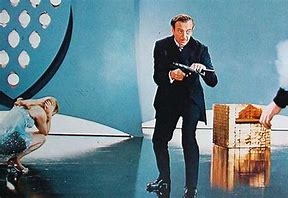 Here he is with his daughter-

I could go on with those, but I'm sure you get the idea. I’m sure I’ve missed some other points, feel free to mention them. Now some of these points are generic, eg the car chase, but an awful lot of them are really specific- eg Bond’s daughter, someone else becoming 007, Bond dying at the end. The similarities are remarkably close.

So, Daniel Craig has been in not one but two remakes of "Casino Royale".