Barbel ScotlandPosts: 31,101Chief of Staff
September 2019 edited March 6 in James Bond Events & Screenings
Our next guest is Graham Rye, the man behind 007 Magazine 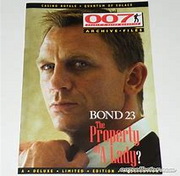 and for many years The James Bond International Fan Club with which I am sure many of us are familiar (I still have my plastic card from the 1980s) as well as organising conventions etc, working on Bond documentaries....

He's also the author of The James Bond Girls

which has been revamped and reissued many times in many different covers, as well as.... but, why don't you ask him yourself?

PS Be sure to ask him about the Moon Buggy from DAF! Great story.