Barbel ScotlandPosts: 32,239Chief of Staff
August 2019 edited March 2021 in James Bond Events & Screenings
The distinguished actor Yaphet Kotto has agreed to answer a few questions from us.
His long career includes Alien, The Running Man, Midnight Run and many more but for James Bond fans he will forever be Dr Kananga and Mr Big in Live And Let Die. 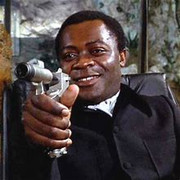 This will be a telephone interview so please keep your questions brief. As usual no personal questions please, and Mr Kotto reserves the right to not answer any particular question as he sees fit.
At this point I don't know what time suits him for the call so I'm not putting a time limit on this until I hear back.