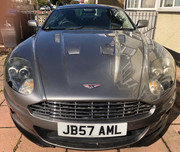 Like any small boy born in the 1960s I had a Corgi C261 James Bond Aston Martin DB5 and like most small boys of the 1960s dreamt of owning a real one one day but barring a lottery win that was never going to happen. Bugger it!
In 2006 at a Sony Pictures private screening of Casino Royale I got my first lustful glimpse of 007’s Aston Martin David Brown Sport & my jaw hit the floor. How the other half lives the Donkey thought. A year after Casino Royale hit our screens in 2007 the first customer’s DBS’s started rolling off the Gaydon production lines (although customers did not receive theirs until 2008) and indeed Barbara Broccoli had secured car No:07 however there were cosmetic differences between the car seen on screen, the car available for sale, Ms Broccoli’s car and indeed the car which would feature in 2008’s Quantum of Solace pre-titles sequence which I bet even DBS owners had not noticed? Such as the Casino Royale car was lacking the chrome trim on the carbon fibre boot lid giving it cleaner lines. The DBS is a GT car made of composite materials such as aluminium and carbon fibre with a bonded (glued together) aluminium box section frame based on the 2004 Aston Martin DB9 built on the same production line as the DB9.

Pre-production in 2005-2006?, Ms Broccoli, Daniel Craig and other EON glitterati attended the AML Gaydon works in the UK where they were shown clay mock ups for Aston’s new DB9 based super car and Mr Craig was able to get to grips with a pre-production DB9 which the DBS was based on. The only other body who got to see behind closed doors was Corgi who would be the first to reveal to the world what Mr Bond’s new ride actually looked like….a DB9 in a very posh frock! Two showroom condition hero cars were produced at Gaydon along with three stunt cars which were built from pre-production 2004 DB9s which should have been crushed as they were not road legal. The two hero cars boasted manual transmissions, an updated leather clad Recaro interior with a new design of centre console which included a dummy EMU (Emotive Control Unit or glass key) but also had an ignition key, where the stunt cars had flappy paddle transmissions, standard DB9 interior and centre consoles with near identical Recaro rally style seats. All five cars were fitted with new styled front and rear bumpers, the rear bumper being finished off with a ground hugging carbon fibre diffuser and the front bumper having road hugging carbon fibre splitters, restyled side sill covers with deep air flow channels, a restyled carbon fibre boot lid with a lip spoiler incorporated into the moulding, and to finish off this dramatic restyle the standard DB9 bonnet had been cast in carbon fibre where originally the DB9 bonnet was aluminium. The DB9 bonnet had two mesh air intakes where the DBS had four which gave it a much more aggressive look. Even the grille had been restyled to continue the staggered aggressive stance of the bonnet. If that wasn’t enough the chrome wing side strakes incorporated stylish LED repeater flashers and the DB9’s 19” wheels were upgraded to a 20” design.

If Bond’s new 2006 ride being a 2004 DB9 sounds unbelievable? Then please note the roll car’s rusty disc brakes ….DBS’ have carbon discs which do not rust! 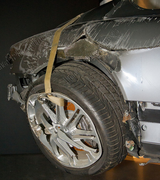 Jump forward 13 years and after a major health scare (that’s putting it mildly 007!) where I’d given up driving 2 years previously, the idea of owning an Aston resurfaced although in reality I was probably only looking at a clunky yet stunning DB7 however I ended up “settling” for a low mileage 2007 DB9 Sport which was pretty much the transition model between the DB9 Coupe and DBS. It had uprated performance, a more luxurious leather clad interior, its suspension was 6mm lower and the composite floor pan of the standard DB9 had been updated to a more rigid aluminium unit which made the car handle like it was on rails. To drive it was an absolute joy apart from the fuel bills, insurance and £585 a year road tax! I made contact with the AML dealership who had supplied the car new 12 years previous and started ordering a few bits. Nothing major. Eventually I started to think it needs a few DBS parts so I purchased the grille and steering wheel and changed the dated wood effect interior panels to Aston factory issue piano black which looked amazing. I then had the opportunity to change the door arm rests to carbon fibre which lead to Obsidian Black DBS memory seats with silver stitching ….slurpy! I wasn’t planning on going any further but thought the DBS boot lid would give a dramatic appearance to the beast’s ass which of course lead to a budget busting carbon fibre bonnet and if I’m changing that better do the front bumper and carbon splitters so the whole front end’s coachwork could be done in one expensive hit! I was happy yet broke for a while but when funds were available decided to fit the dramatic carbon fibre rear diffuser but of course typical Aston Martin, the new diffuser was not compatible with the standard DB9 bumper so a new DBS bumper was ordered too and those carbon fibre door mirrors @ £3k a pop look rather special …parp! Even the guys at AML asked the question pretty much everyone asks after hearing this story and that is “why didn’t you just buy a DBS?” simple shortened answer “ because the car in Casino Royale was a 54 plate DB9” (see photo).

Okay so what was missing now? Was there anything left to change? Well yes, the screen car had an unusual design of exhaust cap so I was on the phone to Aston Martin who surprisingly had no record of the items in question and who thought it may possibly have been something created by the Gaydon works? Numerous google searches did not reveal a single image of an on the road DBS worldwide fitted with this design of exhaust cap which was bloody frustrating. Even Barbara Broccoli’s 007 Special DBS had the standard exhaust caps. Outright dumb luck put The Donkey in contact with an AML specialist who had a pair but he did not want to sell them. Knowing the items actually existed I went back to AML Newport Pagnel armed with this revelation which was met with “computer said no!” as it had previously …Buggering bugger it! Over an 8 month period I kept in contact with the AML specialist making revised offers which he either did not reply to or they were rejected stating “these are collector’s items (really?) which I want to send to auction in the US in 2020”. With November in full swing I sent a pre-Christmas madness offer which amazingly he accepted. In a follow up email I wanted to confirm that the exhaust caps were the same style as those seen on the Casino Royale car? His answer was a surprising NO! ….they are the actual exhaust caps off the screen car! He had worked at Aston Martin Gaydon preparing and maintaining the five cars. Post production the cars had been returned to Gaydon. AML archived the hero car and the roll car as law dictated was destined for the crusher but was retained by AML in its rolled state because of its record breaking status. One part which is visible leaving the car during said record breaking roll at the Millbrook Alpine Circuit Testing Ground was its almost entire rear end which incorporated the bumper and carbon diffuser with the bespoke exhaust caps still firmly attached by M5 bolts to the frame of the car which he had salvaged for posterity/safe keeping. They were a little battered. Who would want them? Follow up conversations revealed Gaydon had also maintained the German left hand drive DBS for Quantum of Solace. Asked if he had any bits off those? He said I used to have a section of railing which punctured the engine block of the car which went into Lake Garda and I’ve got a front number plate which turned out to be TT 378 - 20 from Casino Royale! So dumb luck with a very happy ending which put Donk back on the road with his dream car with parts off the screen car. The future? When funds allow, the Donkey intends to get AML to replace the rear seats with the carbon fibre back panel which holds a pair of crash helmets and a fire extinguisher, not forgetting the Snap-On tool tray runners based pop out passenger side accessory trays! …. Who says Donkeys have a rotten life??

Ready for your close up Mr Craig? the actor inside the now stationary DB9 based roll car -{